Skip to content
Sea Girt Lighthouse
Guarding The Coast Since 1896 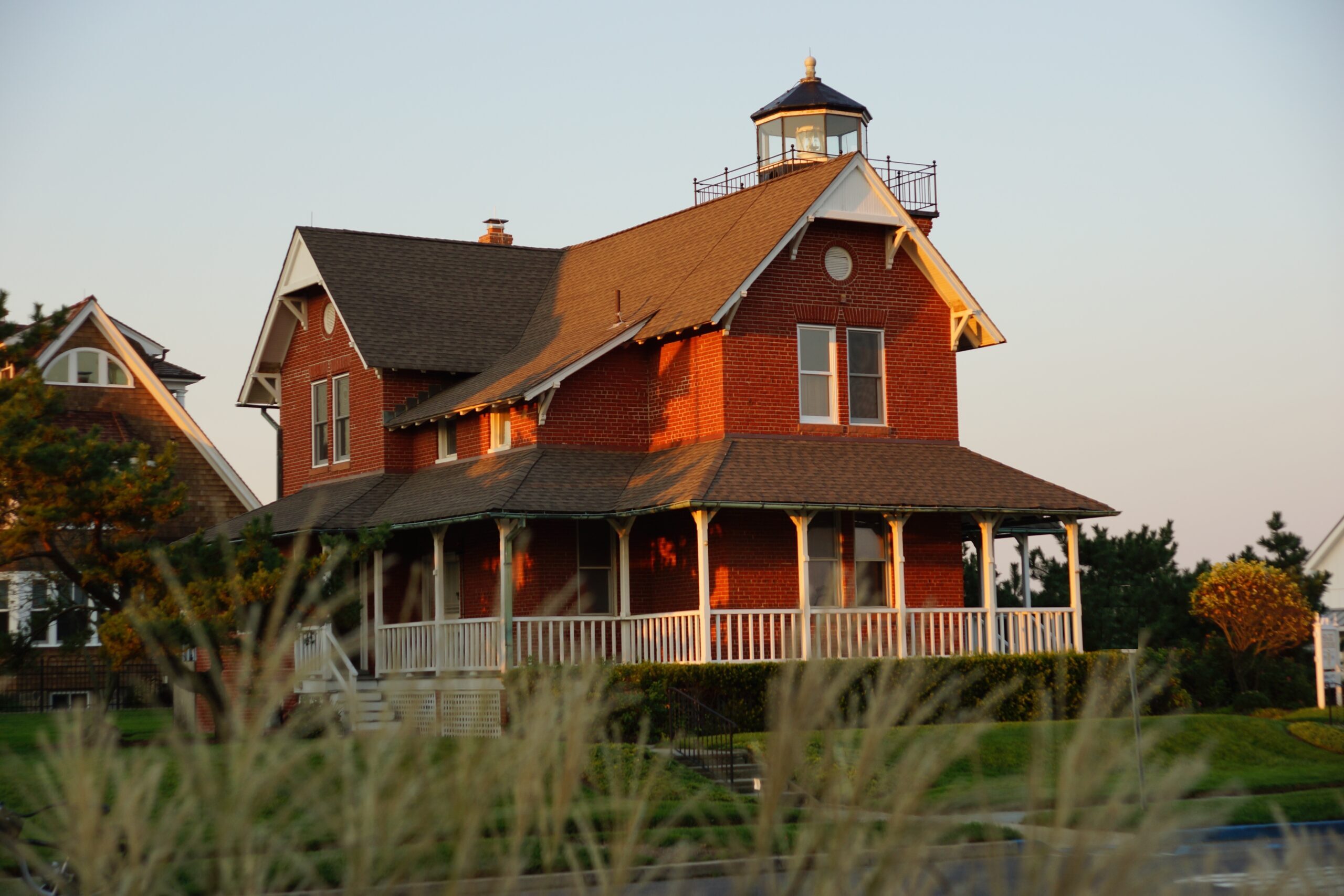 Sea Girt Lighthouse, at Ocean Avenue and Beacon Boulevard in Sea Girt, New Jersey, flashed its first light December 10, 1896. The beacon, which could be seen 15 miles at sea, guided countless mariners in their journeys and contributed to the state’s economic growth and helped make sailing through local waters safer.
The lighthouse was built to illuminate a blind spot midway in the 38½-mile stretch between Navesink Lighthouse (Twin Lights) to the north and Barnegat Lighthouse to the south. It also served as a landmark for nearby Sea Girt Inlet and Wreck Pond.
By the early 1900s, there were some 40 light stations – lighthouses, lightships and range lights – along New Jersey’s 130-mile coastline. Just over half of them survive. But only 11 of the original lighthouses, including Sea Girt, are open to the public.

The history of Sea Girt Lighthouse is a rich one, filled with numerous distinctions and achievements.

The red brick structure with a tower rising 44 feet was the last live-in lighthouse built on the Atlantic Coast. A live-in lighthouse has the tower integrated into the living quarters. In the more typical design, to be found at Barnegat and Sandy Hook Lighthouses, the tower is separate from the keeper’s house.

Sea Girt was equipped with a fourth order Fresnel (pronounced fray-nell) lens, which was 30 inches high. The multi-sided beehive-shape lens had a bulls-eye prism like a big magnifying glass in the middle of each side. A weight dropping down a shaft called the channel caused the lens to revolve on a pedestal. The light source – the flame produced by a wick burning kerosene and later oil – was constant. But mariners saw the illusion of a light blinking on and off. The light was being projected through the first bulls-eye prism, then appeared to go out as it was between prisms, only to flash again as the light went through the next bulls-eye prism and so on as the lens slowly turned.

The keepers assigned to Sea Girt were a dedicated, diverse, colorful and interesting group. The first keeper, Major Abraham Wolf, who was in his early 70s at the end of his tour, was then the oldest lighthouse keeper in the U.S. Lighthouse Service on active duty.

During the Civil War, he had been an effective spy for the Union Army. While a Northerner, he could affect a convincing Southern accent. So his commanding officer had Wolf put on a Confederate uniform. He was then taken to a Delaware prison camp where he mingled among Confederate prisoners. Speaking in a drawl, he successfully passed himself off as a fellow Southerner, and thereby gathered vital information on Confederate troop strength, encampments and battle plans.

Sea Girt’s third keeper was a woman, Harriet Yates, who capably served as acting keeper for two months, taking command upon the death of her husband Abram, who died May 29, 1910 and was waked at the lighthouse. During World War II, the Coast Guard was in charge. After the war, a 19-year-old Coastie was on the last detail as Sea Girt Lighthouse was finally shut down. (See Keepers Gallery)

In mid-1921, Sea Girt became the first land-based light station equipped with a radio beacon navigation system, designed to enable mariners to navigate into New York Harbor and through local waters in poor conditions such as heavy fog.

A transmitter began to broadcast to ships at sea, sending out radio signals over wires stretched over the lighthouse from two metal towers built on either side of the building. Transmitters were also installed on Ambrose Channel Lightship at the entrance of New York Harbor and on Fire Island Lightship off Long Island’s south shore. Mariners could then locate the positions of their vessels by triangulation – tracking the radio signals of these three installations.

In 1928, Sea Girt’s transmitter was shut down and the towers dismantled. The transmitter was transferred to Barnegat Lightship. Ambrose Channel and Fire Island Lightships continued to broadcast. Radio beacon navigation, a forerunner of LORAN (long-range radio navigation), proved effective and was expanded to other locations.

It was September 8, 1934 when fire engulfed the luxury liner Morro Castle in a raging storm three miles offshore in what proved to be the ship’s 174th and final voyage. The ship, which sailed from Havana, was bound for New York but never made port.

The crew fixed their position from the beacon of Sea Girt Lighthouse. The fire was out of control within 45 minutes of its discovery. The order was given to abandon ship. As passengers and crew entered the stormy waters, the beacon directed them to shore and offered hope. The lighthouse, under the command of keeper George Thomas, also served as a first-aid station.

The cause of the fire was never determined, although arson was suspected. While 137 died in the tragedy, more than 400 survived due to the heroic rescue efforts of fishermen, lifeguards and many other local people who risked their own lives to save others

On July 1, 1939 authority for America’s lighthouse was transferred from the U.S. Lighthouse Service to the U.S. Coast Guard on the orders of President Franklin D. Roosevelt. When America entered World War II, the order came down to extinguish the beacons in all U.S. lighthouses so as not to give direction to enemy ships. Sea Girt’s Fresnel lens was removed.

As many as 15 Coast Guardsmen were stationed at Sea Girt Lighthouse during the war, sleeping in bunk beds, with more Army troops camped on the north lawn. They stood watch in the tower, scanning the waters for enemy ships and for Allied ships in trouble. The troops also patrolled the beaches with guard dogs, looking for landed saboteurs.

In 1945, after the war, an automatic light – like an airport beacon – was mounted on the top of Sea Girt Lighthouse tower and the lighthouse was decommissioned. Except for occasional inspections, no one was assigned to the lighthouse for almost a decade.

Then in 1954, two Coast Guardsmen were sent to Sea Girt on the last post. Seaman First Class Henry Wapelhorst, 19, and a boatswain’s mate oversaw the construction of metal tower on a 22×24-foot plot at the northeast corner of the property. When the new tower was completed in October, the automatic light atop the lighthouse was removed and put on the new tower.

In 1956, the federal government put the lighthouse and surrounding property, excluding the metal tower on the 22×24-foot parcel, up for sale. The State of New Jersey wasn’t interested. The Borough of Sea Girt was and bought the lighthouse for $11,000, using it for more than two decades as the library and community and recreation center.

But by 1980, the heavily-used lighthouse had become dilapidated and needed major, costly repairs. The building was closed. The Borough considered its options, including selling the property. That’s when concerned citizens formed the Sea Girt Lighthouse Citizens Committee to “save our lighthouse.” They went door to door seeking other recruits and donations.

The all-volunteer, non-profit Committee managed to reach a 25-year agreement with the Borough in 1981, leasing the building for $1 a year, taking full responsibility for the building’s maintenance and preservation of its history. There followed a full restoration of the building and extension of the agreement to 2056.

Since its restoration, the lighthouse is in use some 200 days a year. Where its beacon comforted and guided generations of mariners, the Sea Girt Lighthouse today preserves and proclaims its fascinating history through publications, special programs and guided tours of the building now filled with exhibits of rare photos and artifacts.

Tours of the lighthouse are conducted Sundays 2 p.m. to 4 p.m., except holiday weekends, from mid-April through the Sunday before Thanksgiving. Special tours, popular with school groups and scouts, are conducted by prior arrangement year-round.

Upon entering the lighthouse, visitors are in the keeper’s office, where an exact replica of the weight that powered the revolving Fresnel lens hangs in the channel. They are guided into the home, through the parlor, and then upstairs and finally into the tower’s lantern room.

A growing collection of artifacts covers the U.S. Lighthouse Service and its keepers and their families, the Coast Guard era, the Morro Castle disaster and rescue and Sea Girt of bygone days.

Photos of the families that called Sea Girt Lighthouse home are on display on the parlor mantel. The keepers’ gallery features portraits of the keepers and Coasties assigned to Sea Girt. Among the historic documents on exhibit are the 1903 logbook of keeper Abram Yates, letters of commendations to the keepers and the 1939 executive order of President Roosevelt ordering the Coast Guard to take charge of all U.S. lighthouses.

Among the special events held at the lighthouse are presentations by authors and others on topics of local historical interest, a summer art show, International Lighthouse Weekend in September in which amateur ham radio operators broadcast from Sea Girt and 350 other lighthouses in 50 countries, and an autumn challenge in which participants try to visit Sea Girt and 10 other New Jersey lighthouses in just one weekend.